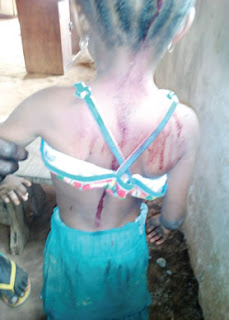 •••My husband is in jail for fifth time, she laments

Neighbours of 37-year-old Chioma Ochemba, a commercial sex worker in

Ayobo area of Lagos, took away her daughter, a seven-year-old girl as

she threatened to kill the girl on Monday.

Ochemba, an Imo State indigene, shocked her neighbours after she

smashed a wood on the girl's head, inflicting an injury that covered

the child in blood, after accusing her of losing a N100 slippers she

had bought for her the previous day.

One of her neighbours, Mr. Busari Tajudeen, said he was forced to

her with a piece of wood.

the Ayobo Police Division where a policewoman rushed her to the

but the mother was nowhere to be found.

girl but instead, dressed up that day and went to her overnight work.

The following day when the police went after the woman, she fought the

police inspector who had gone to arrest her, threatening that nobody

dared to take her child away from her.

Ochemba, who has three children (living with their grandmother in the

village) by her first husband and another three (aged seven, five and

her to deal the girl such a deadly blow.

But neighbours said she regularly beat the children brutally.

very troublesome. She beats her children brutally all the time. She

neighbours. But when she hit the seven-year-old in the head and blood

gushed out, I just could not take it anymore. If anything happened,

people would ask why we did nothing," Tajudeen said.

But Ochemba explained that her anger was a result of frustration.

"I am always suffering because of these children. Their father is in

jail now. This is his fifth time in the Kirikiri Prison," she said.

Ochemba told our correspondent that before her husband went to jail,

he was an Indian hemp vendor.

She said, "I have not been able to send the children to school since

he went to jail eight months ago. At least he was able to send the

children to school through the money he was making selling Indian

children I am suffering so much. It was after I broke her head that I

realised I was too harsh. I did not intend to beat them."

Ochemba's neighbours said anytime she went off to work overnight, she

locked the children up in her room all by themselves.

"My neighbours are bad people. None of them can look after my children

while I go to work, that is why I lock them in the house," she said.

along with the police, took Ochemba and her children to the children's

department of the Ministry of Women Affairs and Poverty Alleviation of

what should be done to their mother.

Favour Benson, said the state government had decided not to charge

"Right now, the welfare of the children is what the officials are

still focusing on. This is where The Lagos State Government should be

applauded. The children have been put in the home where they would

also be enrolled in a proper school. Their mother has been instructed

to put her life in order," Benson said.

Nigeria Air Force Troops The Chief of the Air Staff (CAS), Air Marshal Sadique Abubakar has used the occasion of the festive period to appreciate and commend personnel in the North East for their commitment […]

The owner of a popular food joint in Uyo has allegedly confessed to using corpse’ water to make her food. According to a report by Facebook user, Gabriel Ufot , the food joint called Eka […]

Happy Birthday to Prof.Yemi Osinbajo DOWNLOAD NOW Being a Journalist and most importantly as a Nigerian , am one of the people who who hold the view that Nigerian Politicians have failed the country considering […]

Video: DMX body escorted by fans as it is moved from hospital